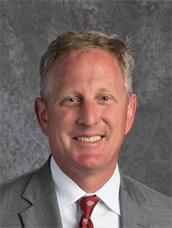 After growing up in Miami, Florida, Dr. Poole attended Hampden-Sydney College where he studied economics and went on to obtain a graduate degree in education from George Washington University. He taught social studies for ten years at Cooper Middle School and nearby Langley High School. While at Langley, he received his doctorate in education leadership and public administration from George Mason University and was a graduate fellow on Capitol Hill.  He later worked as an assistant principal at the middle school and high school levels before becoming principal at Lanier Middle School in 2006. In addition to his work in Fairfax County Public Schools, Dr. Poole has also served as an Adjunct Professor for the Curry School of Education at the University of Virginia. Dr. Poole served as principal of W.T. Woodson High School from 2015-2017 before being named principal of Chantilly HS in August of 2017. His wife, Christy, is a Spanish teacher at Franklin Middle School. His son, Jake, is a 6th grader at Lees Corner Elementary School and his daughter, Caroline, is a 10th grader at Chantilly. He is proud to a member of the Charger Family, both as principal and as a parent.