How do the mythologies of the world’s many civilizations compare? What can their deities tell us about their individual cultures? I wanted to deepen my understanding of mythology and challenge myself to include as many ideologies as possible, which I explored throughout my pieces. The ones I've included here come from a broad spectrum of cultures, both geographically and in their individual characteristics.

The first illustration is of the dragon Goddess Tiamat from Babylonian mythology. Each one of her five heads represents a different species of dragon she birthed.

The next piece is a portrait of the cat-headed goddess, Bastet, from Egyptian mythology.

The third image is of the World Turtle, a prominent being in Native American creation myths, who is thought to carry life and the natural world on its shell. Next, I used a stippling technique to create a drawing of the Norse deity God Odin’s two ravens, Huginn and Muninn. The names of these birds translate to “thought” and “memory”, very fitting titles for companions of the God of wisdom.

The final picture I chose to include is a representation of the mythology surrounding the greek fates, specifically Atropos, who is responsible for cutting the thread of life. Throughout my exploration of these mythologies, I learned an immense amount about their cultures, and the parallels between them. Did you know that the concept of the World Turtle exists in Chinese and Hindu mythology completely independent of Native American cultural narratives? I didn’t either!

Fun fact: I will be attending Emory University in the fall to pursue a degree in Mediterranean Studies and Archaeology! 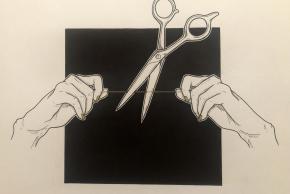 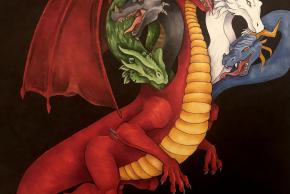 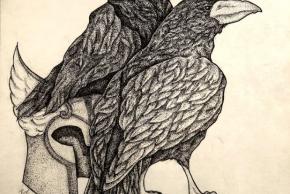 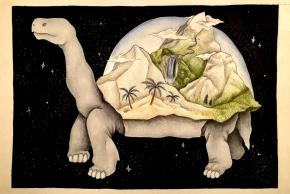 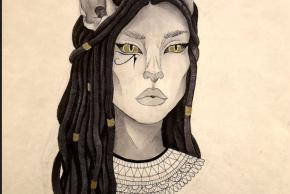